Edward Farrington was a druggist who operated a pharmacy on Beekman Ave. in Sleepy Hollow NY in the early 1900s. He was also a publisher of postcards featuring local landmarks in the Tarrytown & Sleepy Hollow are, including a series of cards with views of the Rockefeller family’s Pocantico Hills estate.

The cards I’ve collected in this series so far are numbered sequentially from 404,411 to 404,422, and were likely created around 1908 to 1910. However there are two postcards in the series that I’ve yet to find. These two ‘lost’ cards should be numbered 404,412 and 404,415. If anyone has any information about these lost Farrington postcards, or can provide a digital image of them, please feel free to contact me. I would really appreciate any information you may have.

Here’s what I’ve found so far:

This postcard shows one of the many carriage roads (or, bridle paths) the Rockefeller family built throughout Pocantico Hills and Sleepy Hollow. More photos of the carriage roads can be found in ealier posts here and  here. 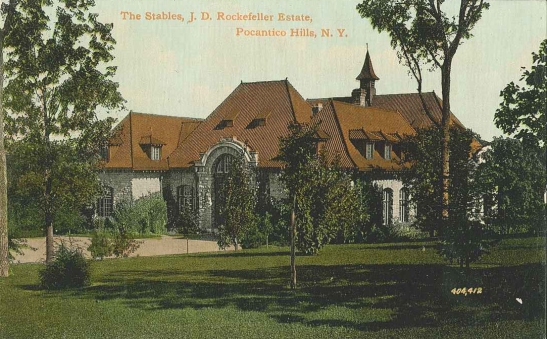 This week a friendly neighbor at the Rockefeller Brothers Fund’s Pocantico Center found this postcard in the RBF’s collection of Kykuit related ephemera, and shared it with me. Coincidentally, the RBF’s Pocantico Center is located in the same Coach Barn depicted on the card. This building was completed in 1901 as it appears above (ca. 1910). However, after a fire in the late 19-teens destroyed the roof, it was given an Italianate roof to better match the second version of Kykuit.

This is a side-view of the first version of Kykuit, as completed in 1909. In the foreground we see the newly completed Inner Garden. Notice the four potted orange trees in front of the awnings and the row of young Linden trees on the left side of the image. This postcard is interesting becuase it shows the Inner Garden’s original relationship with the first version of the house. From 1910 – 1913 the exterior of the house was totally remodeled, and today looks much the way it did in 1913. 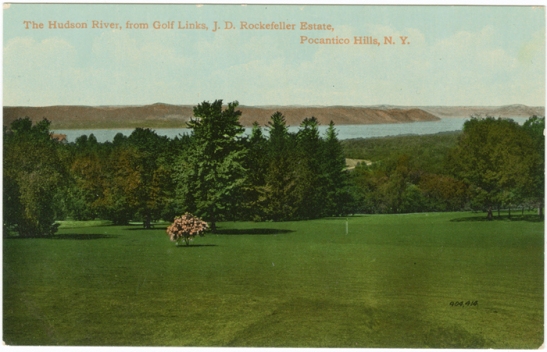 The private golf course surrounding Kykuit was laid out in 1901 by golfing legend Willie Dunn. The course is only 9 holes, but its reversible so you can turn around at hole 9 and play backwards to the beginning. (No one else is playing behind you, so you can play backwards, forwards, whatever you want, it’s a private course.) It’s still there, and still private: 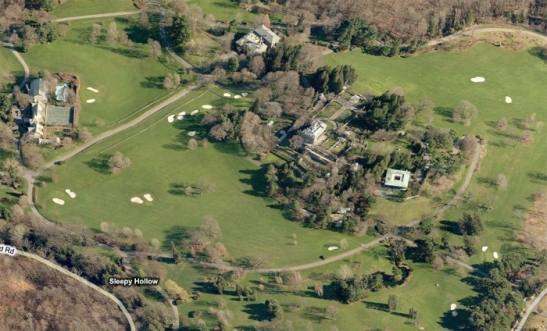 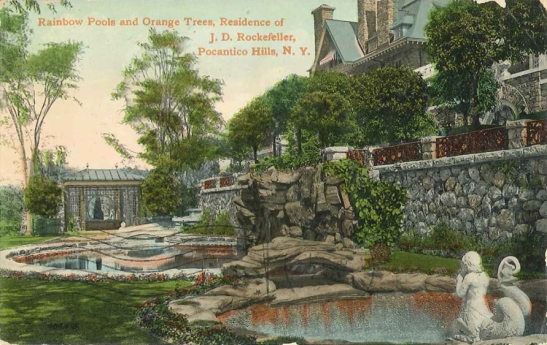 The Rainbow Pools were built to serve as swimming pools in Kykuit’s formal gardens. The edge of the pools were lined with perforated water pipes, spraying a fine mist over the heads of swimmers. Sunlight would be refracted through the mist, creating rainbows over the pools. The Orange Tree Terrace is located above the Rainbow Pools, and was used to display Kykuit’s collection of potted orange trees. See postcard number 404,421 below for more info on the orange trees.

The title of this postcard is misleading in that the tea house we see on the right edge of the image is the Stone Tea House, built to resemble an ancient Pompeiian tea house complete with reproduction furniture:

Of course, there is a Japanese Tea House at Kykuit. It’s located in another area of the gardens, and is very different from the Stone Tea House:

This garden is currently known as the Brook Garden, not the Morning Garden (which is around the corner behind the Stone Tea House). It’s interesting to see the Brook Garden before it was planted with weeping cherry trees, as it’s been for the past century. Also note the two Japanese lanterns on the right edge of the postcard. They’re still there of course: 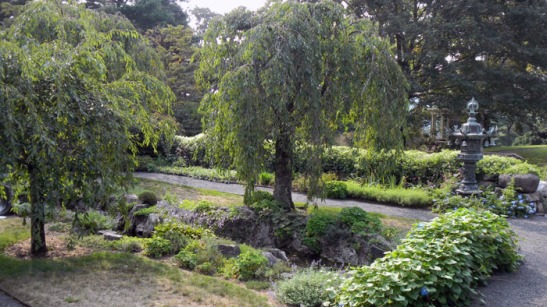 The Orangerie was completed in 1908 to house tropical plants such as the Rockefellers’ collection of orange trees. More on the ancient-ness of those trees below. The Orangerie is still in use:

Unlike the Orangerie, the Palm House and Conservatories no longer exist, but here’s an aerial photo from the 1930s showing them located between the Orangerie and the Coach Barn:

This image shows the old ‘rock cut’ of the New York Central Railroad’s Putnam Division. The rock cut is located along the initial route through the village, and was used from about 1880 to 1882, when it was abandoned. See my earlier post for more info.

404,421  Marble Fountain in Circular Garden, Estate of J. D. Rockefeller, Pocantico Hills, N.Y. Many of the Orange Trees in this Garden are more than 400 years old. 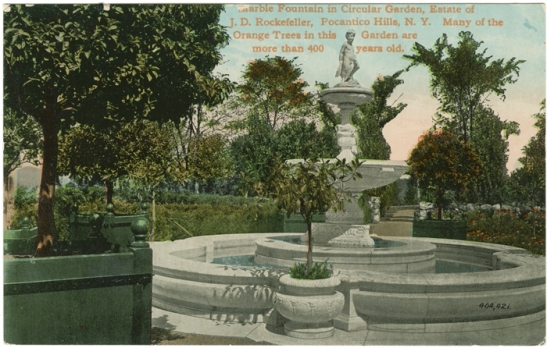 The ‘Circular Garden’ is now known as the Rose Garden, and features a marble reproduction of a renaissance fountain in the Boboli Gardens in Florence, topped with a putto based on a sculpture by Donatello:

Surrounding the fountain (in the postcard) are a few of the orange trees, which had been purchased in 1908 for the Rockefellers by the landscaping firm Wadley & Smythe from the estate of a Marquis in La Mure, France (it’s near Grenoble). The orange trees were claimed to be 400 years old (making them 500 years old nowadays), but there’s no evidence I’ve found to support this.

So, no more orange trees at Kykuit.

Again, ‘Japanese Pergola is a misnomer; they’re intended to be italian.  It’s difficult to see in this image, but the Rose Garden originally featured a hedge maze:

After the first few years the maze was replaced with more roses.

Also, the numbering system doesn’t mean Farrington published over 400,000 postcards. Rather, it’s likely the 404 prefix was assigned by the printer for all of Farrington’s cards.

Again, if anyone out there has any information about the remaining ‘lost’ postcard, or any other Rockefeller estate related postcards by Farrington, please feel free to contact me, or leave a comment below. I would greatly appreciate it.

(Images are courtesy of the Rockefeller Archive Center and the Westchester County Historical Society).

This entry was posted on December 27, 2011 by Lucas Buresch in Historic sites, Pocantico Hills, Printed Ephemera.